Hong Kong has a very good public transport system including regular buses, mini-buses, trams, trains and an under-ground train system - the ‘Mass Transit Railway’ (MTR). We advise you to purchase an ‘Octopus’ card. The airport is situated on the north coast of Lantau Island at Chek Lap Kok and is easily reachable by means of the Airport Express train, with stations at Central, Kowloon and Tsing Yi. There are also good bus services at the airport as well as ample taxis and adequate parking.

The Central and Kowloon Airport Express stations also have in-town check-in services for up to two hours before the flight departure time. For comprehensive details on the services of each mode of transport and each area check at the Transport Department website, call their hotline 1823 or go to the Government Publications Office in 4/F Murray Building, Garden Road, Central. Route maps can also be found at DiscoverHongKong kong or go to the HK Tourism Board Visitors Centre, at the Tsim Sha Tsui Star Ferry Concourse or the Peak Piazza.

Taxis are metered and still relatively cheap. Fares are based on a “flag fall charge” plus mileage though note that waiting time is also accountable. Tipping is discretionary though usually around 10%. Taxis also charge extra for luggage, animals and tunnel fees and should have the relevant charges for this displayed. A receipt can be given if requested. All taxis serve the airport, however note that red taxis serve urban areas of Hong Kong Island and Kowloon, blue taxis serve Lantau Island only and green taxis serve New Territories destinations.

Also, be aware that they will not stop on a restricted area of the road, so check the nearby street signs if empty taxis keep sailing past you - many roads have certain times when stopping is not allowed. It is possible to make an arrangement with a specific taxi to pick you up from home at a regular time each day to go to work. There are various companies running taxi services in Hong Kong - for a call service try to call 2574 7311, 2527 8524, 2527 6324 or 2398 2686. Property Lost in Taxis hotline, call 1872 920. 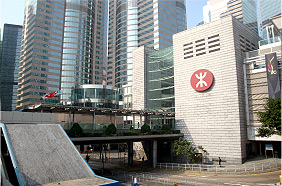 There is a well-organized and clean underground/above ground train system - the Mass Transit Railway or MTR that runs from 6am to just after midnight and later on special holidays. The lines run across the North shore of Hong Kong Island and over to Kowloon and some parts of the New Territories including North Lantau Island and Disneyland. The newest Southern line has 5 stations starting at Admiralty and provides a fast commute to Ocean Park, Wong Chuk Hang, Lei Tung and South Horizons on Ap Lei Chau. There is also a branch line to the airport, the Airport Express, which is the fastest way to get to and from the airport. MTR enquiries: 2881 8888 or MTR website.

MTR combined with KCR (Kowloon Canton Railways) some years ago and they run main line trains starting at Hung Hom in Kowloon to Lo Wu at the border with Shenzen in China, stopping at various stations on the way. At the border, passengers disembark, go through immigration and then board trains to the rest of China. They also run inter-city passenger trains directly to Guangdong, Beijing and Shanghai. On 23rd September 2018 the Hong Kong section of the high speed train network opened, linking it to the world's most comprehensive high speed train network throughout mainland China.

The bus service is Hong Kong is extremely comprehensive and double-deckers, single coach style or small 14-seater mini-buses cover the whole territory. The service is generally frequent and relatively cheap. Children under 4 travel free; 4-12 are half-fare. Fares displayed are usually paid into a box as you enter or leave the bus, so you require the exact amount of change if you don’t have an Octopus card. The mini-buses will stop anywhere for you, as long as stopping is permitted. On these, children pay full fare. The green mini buses run on fixed routes as displayed; the red mini-buses run on an ad hoc basis according to demand, such as race-days and public holidays.

There are currently 3 different companies running various routes for the regular buses c and to check bus routes, please refer to- Citybus (2873 0818) New World First Bus (2136 8888) Kowloon Motor Bus (2745 4466) When you first arrive, or when you want to show Hong Kong off to visitors, try an open top bus ride – if it’s not raining! There are a few companies offering this, the Big Bus Company starts from outside the Central Star Ferry Pier 7, also check the Rickshaw Sightseeing Bus. 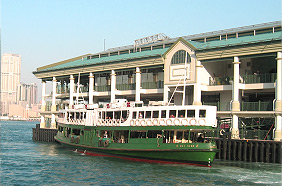 Hong Kong ferries serve as both vital public transportation and as a first-rate tourist attraction. Star Ferry: The Star Ferry is one of Hong Kong’s most famous features, and now has several routes. The most frequently used is the seven-minute Central to Tsim Sha Tsui ride with another between Wanchai Ferry Pier and Tsim Sha Tsui. Check its website for more information.

Outlying Islands Ferries: Passenger ferries, either high-speed or with a cargo section, run between Hong Kong and Lantau, Peng Chau, Cheung Chau and Lamma, the most popular offshore islands for weekend visits. Smaller passenger boats called Kaidos run special trips on Sundays and public holiday to other islands. Discovery Bay Ferry Service: Discovery Bay on Lantau only has a bus link to Tung Chung and the airport, so many visitors and residents commute by sea.

There is a 24 hour service, with ferries running at approximately 20-30 minutes most of the day, however not many ferries run between 1am-6am. It is run by the Discovery Bay Transportation Services Ltd or call 2987 7351. There is also a “Kaido” (local boat) service which links Discovery Bay with the rest of Lantau via Silvermine Bay. Macau & China: Numerous jetfoils, hydrofoils, jetcats, jumbocats travel across to Macau every few minutes. The journey takes 50-90 minutes to traverse the 40 miles to the former Portuguese enclave, depending on which boat you take.

There is also a helicopter service which takes a maximum of eight people and get you there in less than 20 minutes – at a price! Check Turbojet or call 2859 3333 and First Ferry or call 2131 8877. For ferries to other parts of China, call 2858 3876. Water Taxis (motorised sampans): It is illegal for water taxis to operate in Hong Kong harbour but they can and do operate from Aberdeen, Cheung Chau and other fishing villages where living on the water is a way of life. A sampan can be hired to take you island-hopping. 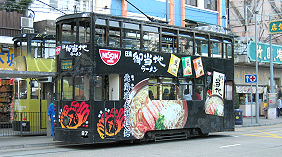 The tram route along the north shore of Hong Kong Island between Shaukiwan and Kennedy Town is almost as much of an institution and tourist attraction as the Star Ferry and Peak Tram. However, it serves a vital function and is still the cheapest ride in town The HK Tramways also run a party tram which can be hired for special events - call 2118 0922 . The famous Peak Tram runs from St John’s Building in Central to the Peak from 7am to midnight, every 10-12 minutes, and is a funicular railway able to negotiate seriously steep slopes. For enquiries call 2522 0922.

The monthly charges for a carparking space can be onerous – up to HK$4000, which limits the numbers who can afford to own cars in Hong Kong. You can import your own car, but the process is time consuming and expensive (Contact Transport Department 2804 2600 or www.gov.hk. for details) Japanese cars are popular because of the price and availability of spare parts. Since you need to be quite wealthy to have a parking space, most people run pretty new cars and second hand cars can be comparatively cheap. Most of the large manufacturers have showrooms here, including Rolls Royce, Jaguar, BMW and Mercedes, this being one of their prime markets.

The HK Automobile Association runs a breakdown service and can advise you on car insurance (2739 5273). Most expats who run their own cars rely on small garages for repairs, as they are so much cheaper than the manufacturers’ agents. In Hong Kong island try Ah Yuen - his garage is in Aberdeen but he will pick up and return your car to home (2814 7700 / 9383 2074). If you experience any difficulties, excessive rudeness or aggravation with any of the transport services, call Transport Complaints Unit Hotline (2889 9999).